The tempestuous weather continues unabated, and although I like it wild it’s playing havoc with my swimming. There’s wild, and there’s WILD. Today, Honey and I stomp through black peaty mud the texture of molten chocolate. We make  squelching noises that resemble a liquidised meal being chomped by an octogenarian with badly-fitting false teeth. The pool at Black Rock thunders and the edge of the dam has been washed away. I strip and wade carefully in before plunging under and popping back up like an ice cube in a whisky and soda.  I daren’t swim across. 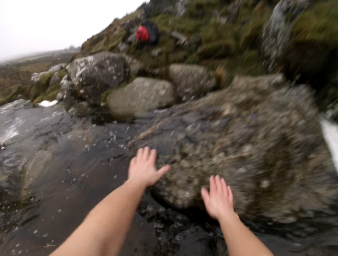 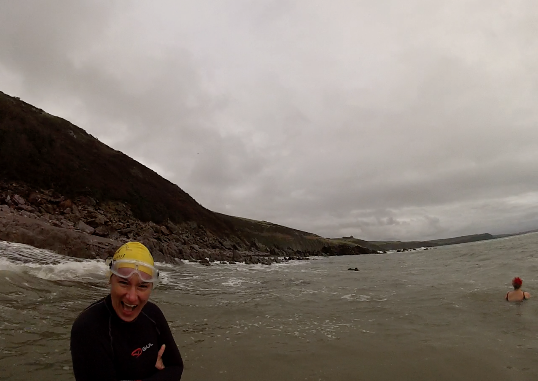 Sophie’s idea again – Wadham is a secret cove accessed via a precipitous track, and it’s normally frequented by nudists. Rain tips and pours downhill and it’s January, so we  allow ourselves the luxury of layers of fleece, woollies, waterproofs and wellies.  As we pick our way from the cliff top we notice there is a patch of light over the sea, and sure enough the deluge stops.  By this time Honey, who has been groomed to within an inch of her life by her Gran, has transformed from a beautifully fluffy cream puff to a mud-bespattered, drenched mop. Of course she’s found a tennis ball. We scramble the last bit which is more of a mountain-bike drop than a footpath, and spy Richard on the beach waiting for us. His family have refused to leave the car.

The rocks are Dartmouth slate according to Richard who’s done some research. The slate is layered and striped in shades of turquoise-bruise and purple-bruise and small bodies of it pop up from the shingle beach like the undulations of Loch Ness monsters.  We change and plunge into bouncy water, which is stained with mud yet still maintains a blue-green tinge to the predominant battleship grey. It’s not too cold, and being engulfed feels like heaven. Michele and I pootle out towards the end of the  reef where waves are waterfalling and sucking. In the end I go fairly close and allow myself to be pulled over rock wards for a while. I swim some of the return in backstroke and when I turn over I can see Jackie’s customary flower bobbing up and down; a summery, bright pink splurge among the hundred shades of grey.

Well, You Can Cry Me a River

I love this post from a local blogger who lives on the West Dart. It chronicles beautifully the crazy life of one half of our favourite swimming river, and includes some wild cooling and wild swimming…

Looking out the window at the West Dart River these past weeks reveals a river gone mad.  During the recent storms, it was consistently a fast moving, boiling, roaring, torrent of water.  On more than one occasion it breached its banks, taking part of our stonewall with it and I worried about the big trees on the opposite bank, which became temporary islands of wood as the river swelled with the rains.  These trees already have awkward leans to them, making it seem as if it is just a matter of time before they slide into a resting position on the hillside as I would onto the sofa.

And yet this same river on a warm day offers a place for wading or taking a cooling dip.  The waters gently babble past providing a refreshing tonic.  One summer day, we stood in the river drinking beers with our friend Hilary. …

Finally we managed to swim today after endless storms and flooding. I’ve been hammered by a cold and cough over Christmas and was desperately in need of some chilly, frisky water. So off we went to good old Wembury where the forecast 7-11 foot surf wasn’t too bad at low tide, and the water and air temperatures were both conveniently 10ºc.

We frolicked in the surf, bobbed around and chatted. Low sun gave two totally contrasting views; one (out to sea) in shades of mercury and the other (towards shore) in technicolor. The seabed resembled a yarn shop at sale time with heaps of ankle-grabbing, tangled, ripped up weeds and the water was khaki, opaque with pulverised sea life.

Afterwards we loitered around Tony’s fire, ate, drank Teri’s mulled cider and shoved hot rocks from the wind-break up our jumpers. An effective way of warming up from the inside. Thanks for reading in 2013 and may you have a wet and wild new year.