Bel Pool with Panda and Woody

We have visitors today; Panda and Woody from Deepest Dorset. It’s a beautiful morning, and we can still smell bluebells although they’re past their best. The Dart is middling-high after the rain, and the colour of a pub ceiling before the smoking ban. As we change at the lower end of Bel Pool a foam berg floats past, revolving gently in the current. It’s fairly easy to swim upstream on the island side, then suddenly I’m whipped by a speeding eddy to the cascade. Floating backwards the cappuccino foam splats spurts and spumes in a crazy dance, sending us over to the rocks. Woody and I both climb up and leap in, it’s invigorating to say the least. The sun hasn’t quite reached the pool, but I feel the warmth as I contemplate the fresh oak leaves overhead. The juddering after drop shows the water is as cold as it felt.

Strip in the Lyd

Continued downpours have left our little river the colour of Jail Ale and with a foaming head. Helen and I were intending to skinny dip, only there’s a couple just downstream setting up camp for the night and a lone walker on the far bank heading our way. So we wimp out and don our cozzies.  We’re still chatting about Helen’s trip to Russia and are properly iced by the swirly wind before we get in.

We duck, swim to the waterfall and explore for a time till I notice Helen is mid strip. So I join her and we toss our swimsuits over to the rocks. Although we’re almost naked, Helen is wearing goggles and I a pair of neoprene boots. How very English. So we whip those off too and lob them to the shallows. The surge beneath the big rock resembles ghostly frogspawn and I imagine ranks of frogs squatting in the depths, bums aloft.

We take turns to swim breast stroke against the flow. So many sensations, and far more subtle than a jacuzzi: the cold; currents that push and pummel howling like gales, or waft gently past like summer breezes; effervescence like birds’ wings brushing on skin, fizzing louder than the roar of the cascade. Each bubble oscillates and atomises on our faces. Our eyes are level with the surface so we see tiny spheres meld and grow before scatting across the pool in the wind. There’s nothing to beat skinny dipping in this exposed place.

The wind whips around and chills wet hair so we dive back under to warm up. I open my eyes and float through beer that turns gold like scrumpy. We begin another chat, rolling and wallowing with the water but cold sidles around and we’re suddenly numbed to the core. After we leave, reluctantly, I can’t feel my towel nor whether I’m wet or dry. A current of ice runs along my spine and radiates like the sun.

We meandered up to the little falls for a dip. This is one of the tamer jacuzzis on the Double Dart, perfect for a sparkling pick me up with minimal effort. Jackie floated across ready to wallow, and disappeared suddenly under the bubbles, to be rescued from the deep by Carole. We shot downstream in shadow on the far side in a heavy current, returning via the central eddy. The water was distinctly nippy and black.

Back at the jacuzzi I worked my way in, bouldering in the water around the mossy hand holds on the rocks. As I neared the falls a judo black belt of a current whipped my legs away to the side. I reattached from the right and struggled to move my feet and legs along, fighting an underwater flume. Then my feet flew upwards like a meteor as the force reversed. I managed to cling to the rock and wedged myself precariously half in, near to the surface. Rachel noticed the river is shallower downstream, and we guessed that the January spates must have scoured and bulldozed the underwater boulders and somehow channeled the current into this scary entity. The force is completely out of proportion to the size of the falls, which is around three feet. From the rocks we were able to see the downward draft to the left, and then the surge up a couple of feet down and to the right. One to explore when the water’s really low, which we hope will happen this summer.

Honey – First In as Usual

A lovely day and a little jaunt involving a prolonged route march in order to explore a particular river on the high moor, which must for now remain a secret as it’s going to feature in Sophie and Matt’s latest wild swimming book due out next year. 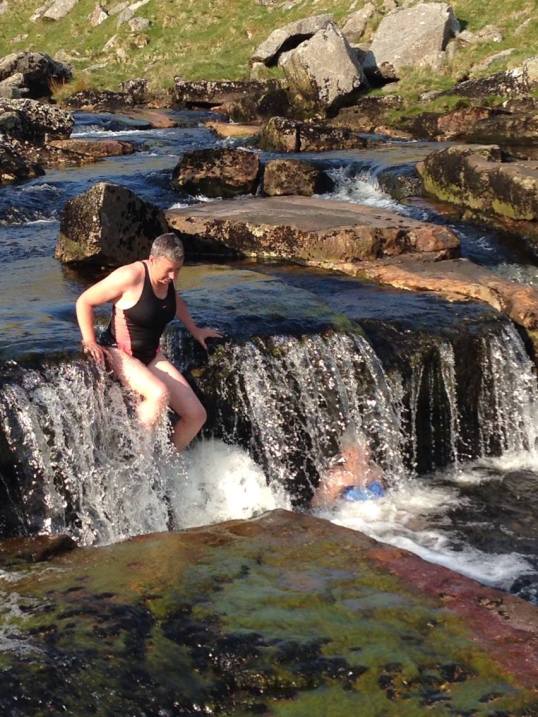 Lou and Baa in the Falls

There is no more spectacular place than this. We swim in a long pool up a narrow chasm to a tallish waterfall, and shoot back down overlooked by vertiginous tors. The spectacle overhead almost removes the pain of collisions with one of the invisible rocks lurking near to  the surface. Next we wander downstream to a smaller pool and play in an ornamental waterfall. Monster-leg-hair moss gives hand and foot holds on granite boulders, while slick green algae is like greased lightning on others.  My sore muscles are pummelled into submission. We head back through sucking bog, and an exhausted Honey swims yet another pool to play with a rather handsome collie named Badger. Finally we arrive at the Royal Standard in Mary Tavy for a lovely pint of Dartmoor IPA and rather gorgeous meal some six hours after setting off. Sophie later names the adventure Ten Tors. 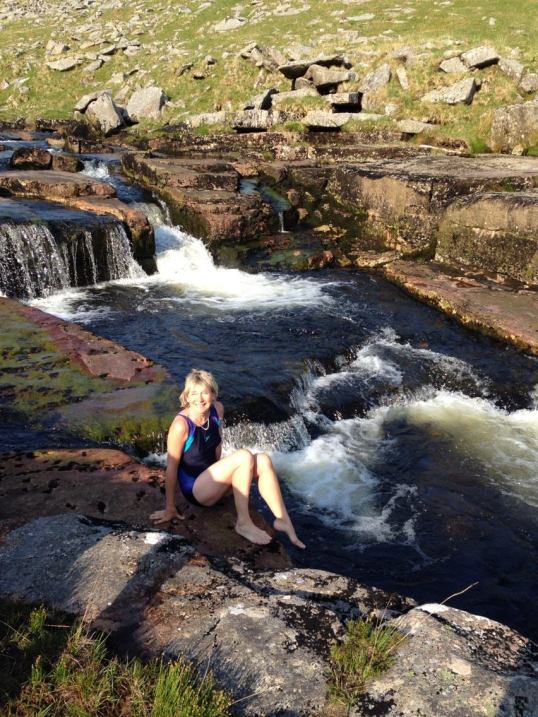 Rachel Thinks About Getting In

Honey Has a Cat Nap

I’m never at my best in the morning, and today I’ve only had a couple of hours kip in TrannyVan after a housewarming party. It’s 0530. Wonwell is a small, isolated beach at the mouth of the river Erme, more or less opposite Mothecombe. The tide’s out and it’s almost light as we walk down and dump our stuff. There’s a delay before anyone gets changed; I always feel cold when tired, and there’s a chilly wind. Finally we trot down to the sea which feels considerably warmer than the air, and wade in through long, low waves that break on the sand bar as the tide begins to flood. I can’t swim fast because of my back and I’m really noticing the lack of exercise-generated heat.

There’s a grey-green-blue coolness to the water, then it starts to transform as the sun peeps over the hill. I’m floating with Honey maybe a hundred yards out and there’s a moment when warmth begins to suffuse me that must be purely psychological.  A peachy tinge ripples then dissolves through the surface and the water beneath becomes bluer. I swim back to shore with Honey who is swamped by a couple of waves. By the time we return to the rocks I’m shivering, and the sea is a good hundred yards closer than it was when we arrived. Joh’s crutch meanwhile has been swallowed by the incoming tide, and will no doubt intrigue the person who finds it washed up one day.

We set up our camping stoves and cook tomatoes, eggs, bacon and eggy bread for breakfast. I’m ravenous. Steph, being German, eats a sacrilegious combination of crumpets fried in olive oil with jam. We threaten to call UKIP. Carole has made bacon and egg cup-cakes, including some with veggie bacon for me. We light a fire and warm and smoke ourselves. I give Honey her ball, which somehow ends up in the fire. Luckily someone notices and kicks the ball out shortly after Honey has attempted to extricate it with her paws. Then I see her lying on the beach breathing smoke like a dragon; she’s holding the hot ball in her mouth. I grab it and cool it in the stream, but she doesn’t seem to have suffered at all…

This was the inaugural swim of our new wild swimming group into the fish dimension... which has an artistic and environmental ethos. The swim was organised by our friend Carole Whelan. Thanks Carole! 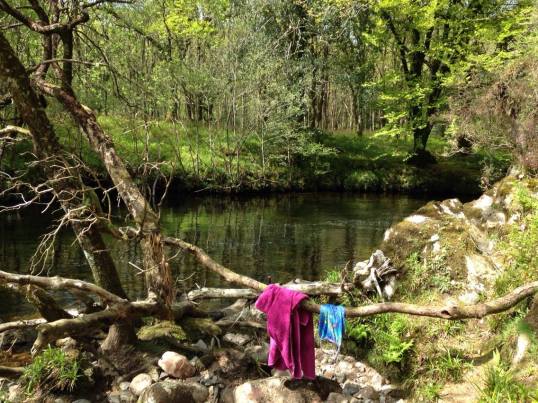 Luscious green vegetation ruffled by a cheeky breeze that gathers and flings birdsong in snatches. Brimstone butterflies, bluebells about to burst, wood anemones. Golden green light and a warm spring sun. Bel Pool looks still from the lower end, cuddled by trees in new leaf. My bare feet slither on silted rocks in the shallows, and I cling to the debarked fallen tree that’s been there ages. I can’t imagine how it’s survived the huge winter spates. When I swim the water’s far colder than expected; 10 at most. The little rapids at the top rush into sight and hearing together, just where the black, dripping crack in the side of the gorge sneaks into my peripheral vision. Here spring is sucked from the air and I can almost see trolls sidling out. Honey puffs to the island and boings off after a scent. My skin is flushed with cold and burning as I dry off.