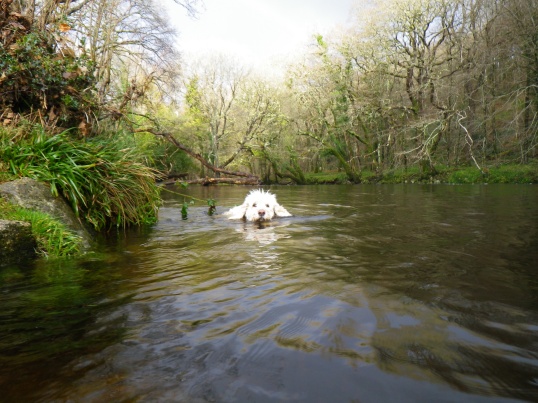 Driving over the hill with the low Christmas sun in front of us, we watch as illuminated swags of rain sweep down the Dart valley like angel hair on fairy lights. Honey and I squelch down the footpath from New Bridge, drowning in the roar of creamy flood water. At Spitchwick the river is dark copper and slides like a serpent around the bend. I whip my clothes off and get straight in. The cold bites as I swim upstream, barely making any headway against the current. This is a day for sticking to the slower water by the near bank. As I dry off, we meet a Newfoundland-Collie cross, who leaps in after sticks. The picture I took shows splashes of water like angel’s wings. Happy Saturnalia, wild swimmers! 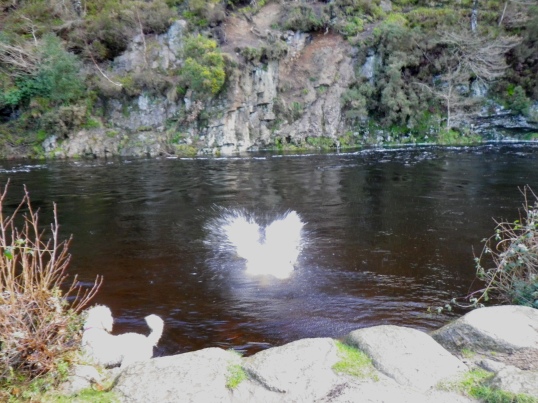 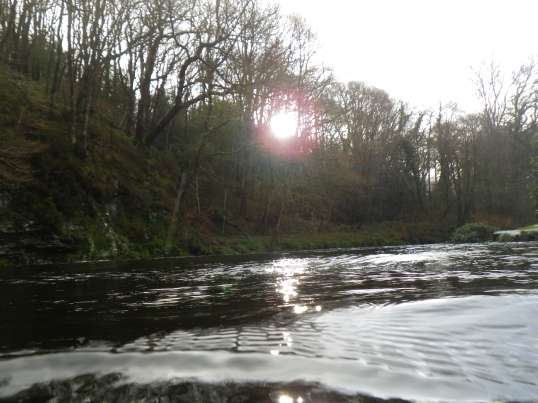 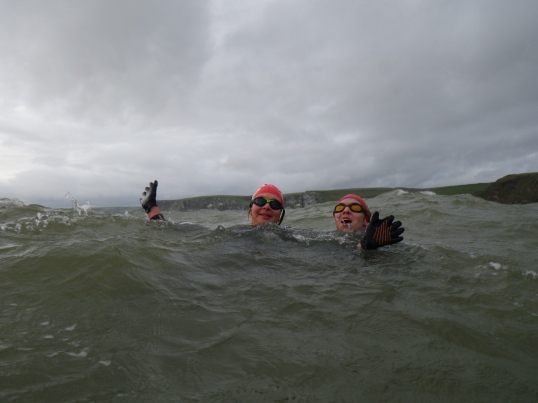 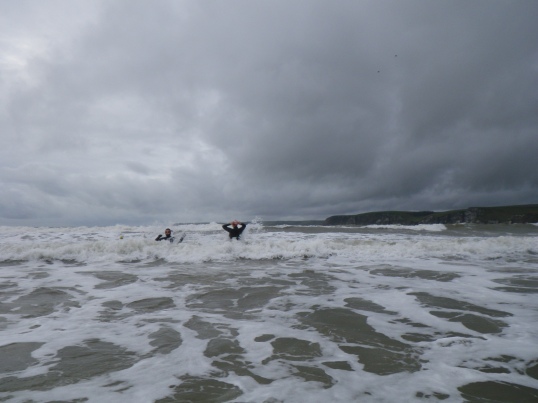 We return to Burgh for a Christmas Eve swim in the hope of getting round the island this time. The swell is less, but it’s much windier than forecast. I feel dull and spaced out having had just three hour’s sleep after a run of night shifts. We boing in through the surf, and are whipped and bashed and smashed in the face by spray. My spirits lift with the swell and I realise that my teeth are chilled because I’m smiling under the water. 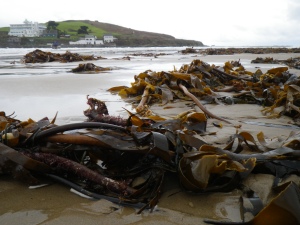 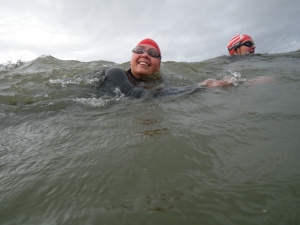 Bouncing along we chat and laugh. The sea’s slightly mucky from the recent deluges, but is altogether friendlier than last week with far less weight behind it. We round the side, and are walloped by waves refracting from the reef and the island.

We decide against going round so play for a while then swim and body surf back in. I wallow in the natural bubble bath where opposing surf collides over the sand neck, then trot up to the car park where Teri hands me a glass of mulled cider and Honey picks up a handsome black labrador and runs off to play ball with him and his family. Bubbly sea, wild weather, fabulous wild friends and a warming drink. A perfect afternoon. 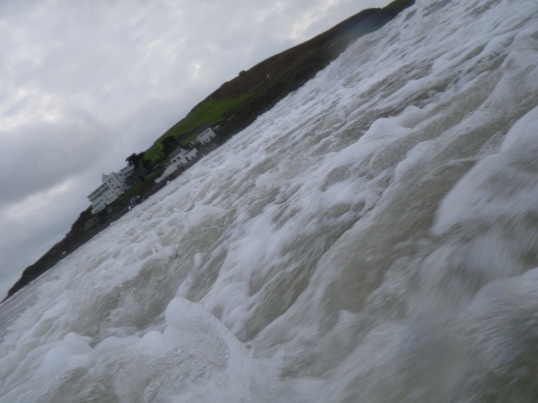 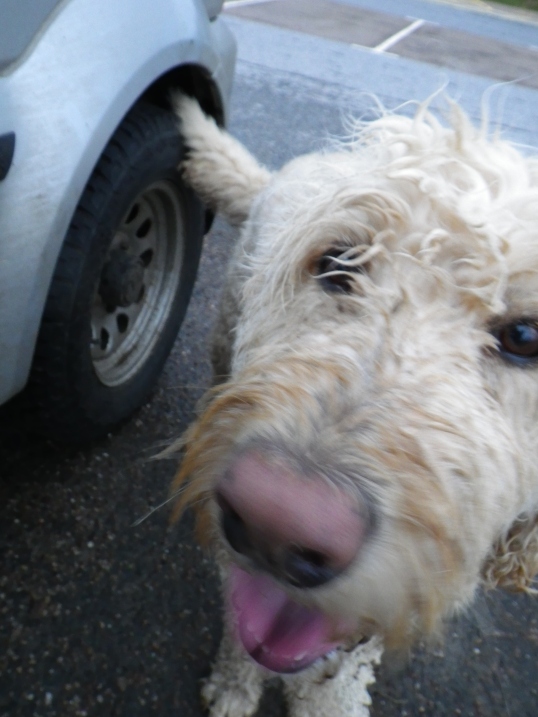 A Cautionary Tale: Peaks and Troughs off Burgh 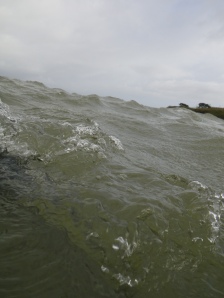 There’s a point at which wild swimming becomes dangerous, and as a swimmer who loves the exhilaration and challenge of wild water it’s vital to understand where that point is. Our risk-averse culture is anathema to me, and I can’t think of anything worse than a life half-lived through fear and avoidance of perceived dangers especially when statistically the most risky think that most of us do is to travel by car.

The swell today is forecast to be between eight and fourteen feet, and despite this a small gang of us want to swim round Burgh Island while the others dip or explore the Mermaid Pool. Although the circumnavigation looks doable from the shore, you can never sense the scale of the sea till you’re out in it.

There’s a squall as we change and charcoal slashes of rain belt from bruised clouds. JJ and Ninja have swum early and we’re looking out for them but there’s no sign. Then they materialise and tell us they turned back because they were wiped out and rolled head over heels by a pair of massive opposing waves, well away from any breaks.  JJ, always on the crazy side of sensible, says it would be ‘reckless’ to try the swim which makes all but Hugo and me decide against it.

Swimming out to have a look won’t be a problem – after all we’ve done this in far stronger winds and big seas before – so Hugo and I head out anticlockwise on the low spring tide. We know that the swell is from the south-west, and if we get that far we can use that energy on the home strait. This is the kind of adventure I love, the abrasive cold of the sea, the smell of stormy water with the whip of the wind on my skin, and the feeling of being on the edge of control. We’re bounced and buffeted and dropped from the backs of the waves. Stopping to chat, we’re feeling good so decide to swim on for a few more minutes before reassessing. I film my swim for a minute, and decide definitely not to go all the way round. Hugo’s way ahead of me though, so I carry on hoping to catch him up. I’m still pretty comfortable. 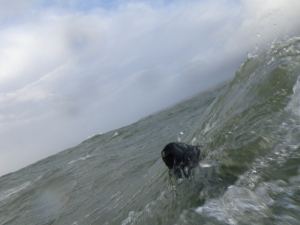 There’s an instant where it changes. I’m teetering fifteen feet up, and the roller-coaster thrill of the descent is punched from me by a side-on psycho wave. I’m lifted again at once and I peer over towards where I last saw Hugo; on the pinnacle of the next swell there’s a brief flash of his blue hat circled by a halo of spray and he’s vanished into the Himalayan sea. My shouts are whipped away and buried beneath the avalanche roar of water meeting rocks and the distant shore. Now I’m lost, afraid and unsure, but know I should stay with Hugo. I swim towards him for a few strokes but my breathing rhythm has gone and with it my stroke. I feel close to hyperventilating and know with utter certainty I have to turn back now.

A wave sweeps me up from behind and begins to break while a flood of adrenaline washes through my body. I force myself to breathe steadily and stare at the back of the wave racing away, glinting steel and with spray flying from the top. The friendly green-blue light has been sucked from the wavelets, and I’m struggling in a sinister, pewter darkness. Sandwiched between opaque sea and heavy slate sky, in my head I’m sinking. My legs are jelly fish as I try to swim breast stroke, but I’m wearing my wetsuit for the first time since August and am unused to the buoyancy which pushes my head under while my legs fly up behind. The reef is almost within reach to my right; I could get over there but that thought shatters with the slow-motion crash of sea into rock. Struggling away from land my fear tries to propel me back; I stop, bob for a bit and turn onto my back while I grapple with my breathing and pull myself together. I know I won’t sink, but my left brain is saying otherwise. I float and think.

It’s a waste of time doing breast stroke, I’m only trying because I want to see what’s coming at me but that’s making me turn my head and stiffen up. I need to swim in front crawl towards the shore and trust myself. An apparition of Kari the mermaid muse tells me I don’t need to look at the sea, I need to feel it so I hold my glide, blowing a steady stream of bubbles underwater and waiting for gaps in the waves to inhale. I feel weightless and unmoving in the current as the water from the shore breakers sucks back out, as though in a disturbing dream where you want to wake but can’t. There’s a gap between the surf dashing towards the beach and the maelstrom around the island reefs. I head for it.

Suddenly it’s over; the sea is smaller and lighter, and I can see the warm, golden sand of the neck. I keep going till I feel my hands brush the bottom, then stand and wade backwards while spent breakers tug at my legs. After a couple of worrying minutes I spot Hugo ploughing towards me. As we trot across the beach he tells me about a mountaineer scaling Annapurna who dropped his gloves and had to watch them slide away, resulting in the loss of his fingers; Hugo says he too has had an ‘Annapurna moment’ today. We should have stayed with the others of course.  But there’s a danger in a close escape beyond that of not making it back alive, and ten minutes later I’m too high still to drink mulled cider or even to eat cake.

Video of the bit before the big scare here: 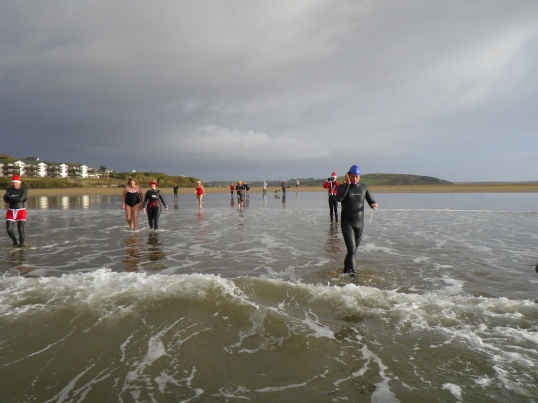 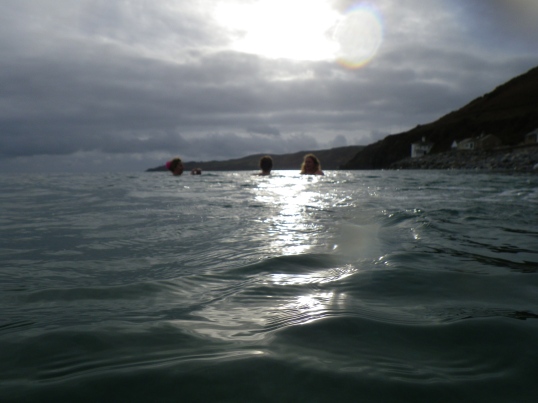 Heaps of tanned pebbles add percussion to our footsteps as we walk to the sea which is gin clear, dead calm and tinted palest turqoise. Babette’s boys are already frolicking like seals. I wade in and feel the nip as the water creeps up my body. The seabed is steeply shelving and I swim straight away, the back of my neck contracting and shortening my stroke. 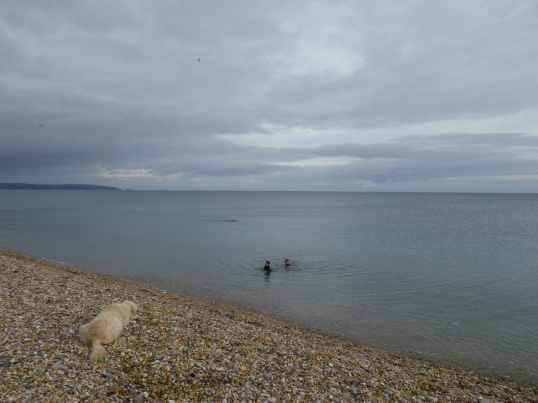 Beesands is a bleak and haunted place with a widescreen horizon, like the setting for a seaside Spaghetti Western. We laugh openly as Babette’s non-outdoor-swimming friends walk in slow motion to their icy nemesis as though to a gun-fight, bodies shrinking and faces contorting with the chill. 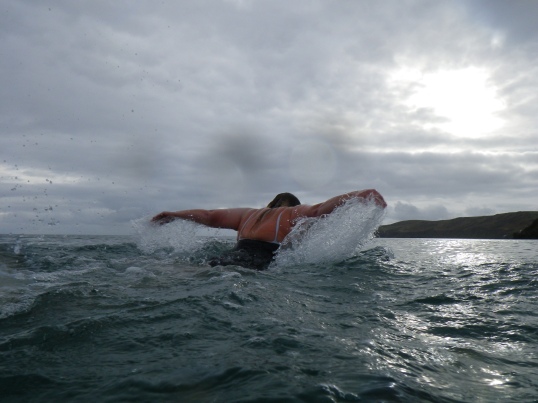 Swimming butterfly, the top of my head is knifed with cold. I surface with a star-burst acid-high. 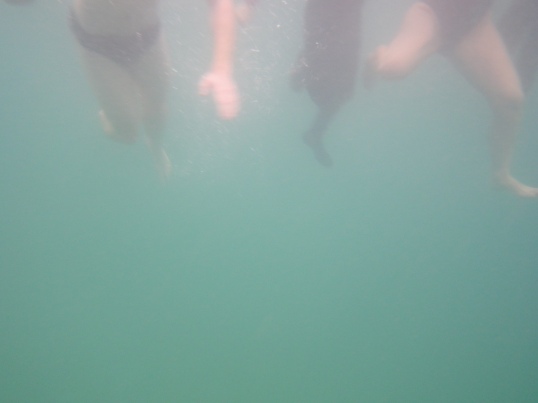 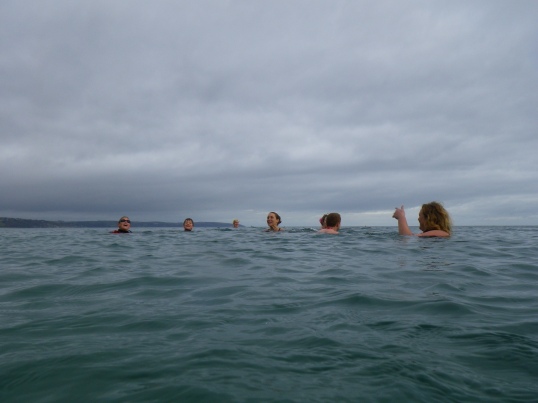