Archive for the tag “Hope’s Nose”

Thatcher Rock – an innocuous-looking, volcano-shaped island speckled with sea-birds and bright green vegetation, a couple of hundred meters off Hope’s Nose. Now this is where things get scary; to get to the Rock, you have to cross the little channel attractively-named The Gut. The bit you swim from forms part of a promontory on the edge of a large bay; the combination of narrow channel and point of course means fast tidal currents.  The only person we know who has achieved this, and who was named for this very feat of derring-do, is Dangerous Malcolm. He and Sophie had hatched a plot to stage a group assault.

When we arrived just before high tide, the sea was the colour of a storm cloud. A shower quickly passed, and we made our way down to the cliff’s edge, from where we scrambled down the narrow, slippery track to the cliff fall near the beach. Finn, Guardian of the Keys, had brought a yellow umbrella and used that to fly down like Mary Poppins. Ninja Elf had met a German family and invited them – they bravely followed us over the edge for their first Devon Wild Swim despite their obvious misgivings.

In order to stake a claim to the Rock, JJ had brought a Jordanian flag, and Jackie had made a Devon Wild Swimmers flag in turquoise and red, which she gave to Dangerous Malcolm. There was some hilarious discussion about where to put the poles. Dangerous Malcolm has recently been cultivating a rather luscious and spiky explorer-type, perma-frosted beard. With his stocky frame and rubber swimming hat atop his neoprene hood, side flaps flipped casually up, he resembled the love-child of Scott of the Antarctic and Amelia Earheart. JJ, in an attempt to float his legs for his upcoming Channel swim,  has allegedly gained a kilo by eating lots of cakes. Next to Dangerous, however, he looked like Tinkerbell going through an Emo phase. Dangerous openly stole his Jordanian flag and tossed it into the Gut, safe in the knowledge that his claim on the Rock was now to be unchallenged.

We plunged into gin-clear sea as the sun appeared, following Sophie and her coterie over fallen rocks piled up like sugar cubes. For the first time in months my face didn’t freeze. I swam easily and arrived at the Rock in what seemed like a couple of minutes; I stopped and trod water, then realised I was heading away from the little gaggle hanging on to the rock at about 2 knots. Bearing in mind we swam at slack tide, this was pretty impressive. The cries of gulls and the stench of fish surrounded us. I swam hard to the up-current side of the island, and spent a while floating and watching the Shags, perched and silhouetted along the top of the Rock like gangs of 1950s bikers with their slick quiffs.

Around the back were more Shags, a couple of birds I didn’t recognise, and some Cormorants. The sea here is deep, bluey, and clouded by semi-dissolved guano. As JJ  and I rounded the corner to the sheltered side of the island, Dangerous Malcolm and flag executed a perfect landing. JJ went to help with the erection of the flag while I took photos from the sea, buffeted by an increasing swell.

Finally we set off back across the Gut, where the current appeared to have slackened slightly more. I made a couple of adjustments and got back fairly swiftly. In the shallows were more sugar-cube rocks covered in lettuce-green algae, and several types of delicate weed, one in bright orange. We clambered back up the cliff, happy and thrilled to have been involved in such a magical swim, and to have made it back without being swept away up the coast – a definite possibility on a spring tide. 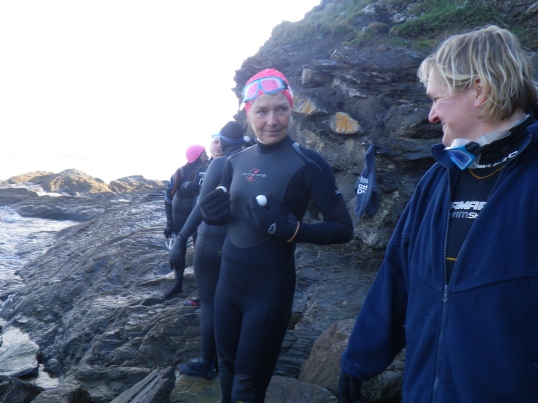 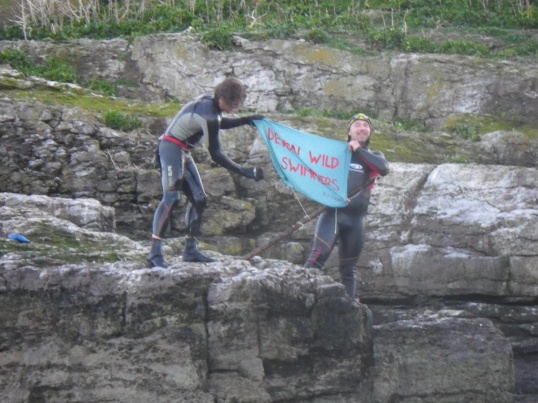