Archive for the tag “Gull” 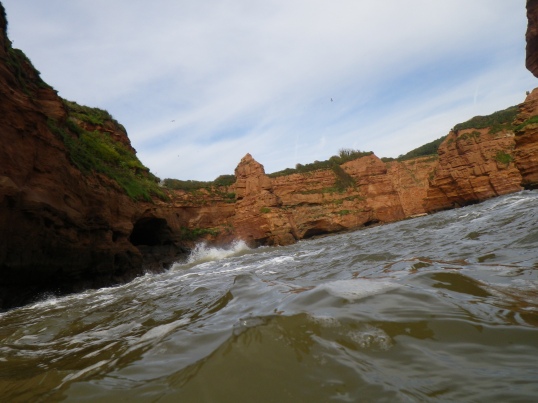 We descend the hill through an ugly rash of caravans and blue signs pointing out everything from Swimming Pool to Caravan Sales. We reach the slipway and halt ahead of the NO DOGS sign. According to several websites dogs are allowed here, and Max, Michelle and I have chosen this place partly for this reason. We walk Frankepedo and Honey along the cliff path instead. A man with a Midlands accent rudely tells Michelle to put well-trained and innocent Frankie on the lead. The dogs are returned to the cars before we swim. 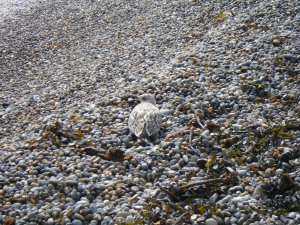 There are numerous people wandering around the caravan park, but there are only two others on the beach and the sea in the area below the slip smells of poo. This is not dog shit, but the result of untreated human sewage outfalls following recent heavy rain. I can accept dog bans on some popular beaches in summer but this is ridiculous. A fledgling gull huddles into the shingle; presumably she’s trying to avoid being banned too.

We edge out through painfully large pebbles into water that’s murky with red sand. We swim over bumpy waves into a maelstrom of wild seas between the fabulous sandstone stacks which are filled with holes like Hobbit Houses. It’s stunning, and lifts my spirits. Luckily, you can’t see the visual effluent of caravans from the sea. 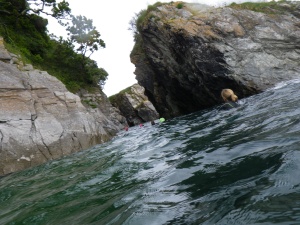 Just around the corner from Dartmouth Castle, Sugary Cove is as sweet and lovely as it sounds. The tide is high and we enter the cool, pale turquoise sea from the rocks then swim along to the gully. Cliffs tower above while gulls wheel overhead. A pair of nesting Oyster Catchers rush past, black and white with long orange beaks, they emit frequent squeaky-toy calls and should certainly be immortalised in plasticine by Nick Park. We dive down and see a large crab who quickly pulls a frond of seaweed over her shell like a wig, in an attempt to disguise herself.

Round the corner overlooked by the Castle is a cave where we play for a while. The pale, quartz-veined slabs close to the surface make the water pulse with colour. We swim back round the outside, where a gull guards a guano-iced rock and the Oyster Catchers reappear, circuiting us several times in alarm. The scent of sea bird wafts over us, while white-sheeted yachts sail silently past like ghosts. 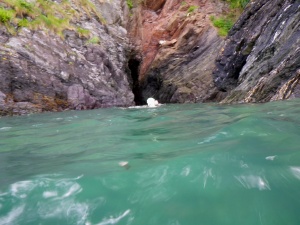 We find another deep cave on the opposite side of the bay.  We’re pulled in and shooshed back; it’s like being caught in the wind-pipe of a living creature. The cold hits here under the damp, limpeted walls. We swim back to shore in sunshine through fragments of weed suspended in bright sea. 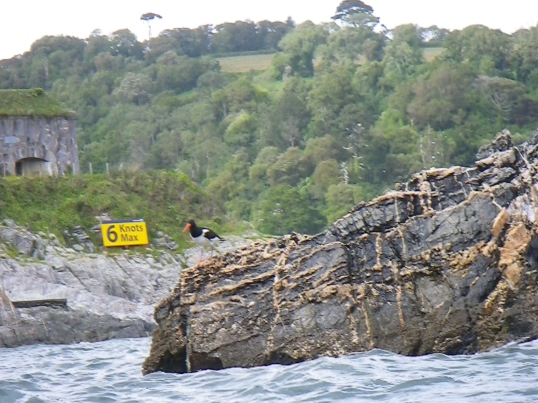 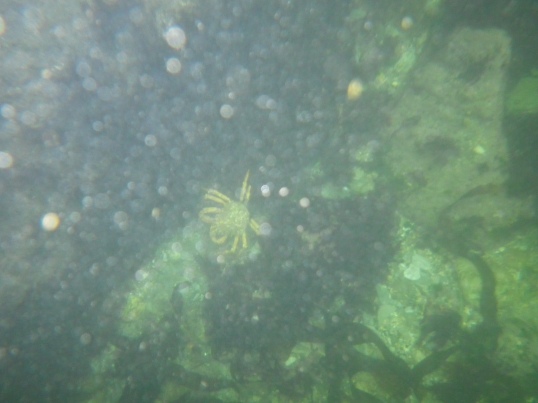 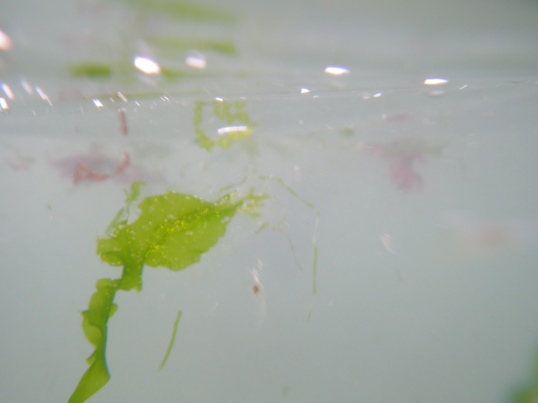